As you drive into Bohemian, the first monument that you see is the John G. "Jan" Rosicky memorial. It dominates the view from the street, especially since you are driving uphill under those dark trees; very impressive, as you can see by the bottommost pictures on this page.

This website has some information about Jan Rosicky, and what he did here in Nebraska. Pavel Veela contacted me from the Czech Republic with questions about some burials in the cemetery, and mentioned that Jan's daughter, Rose Rosicky, wrote "The History of Czech's in Nebraska." Below you'll find the bio written up for Rosicky from a book called "Omaha: the Gate City and Douglas County, Nebraska," in 1917. 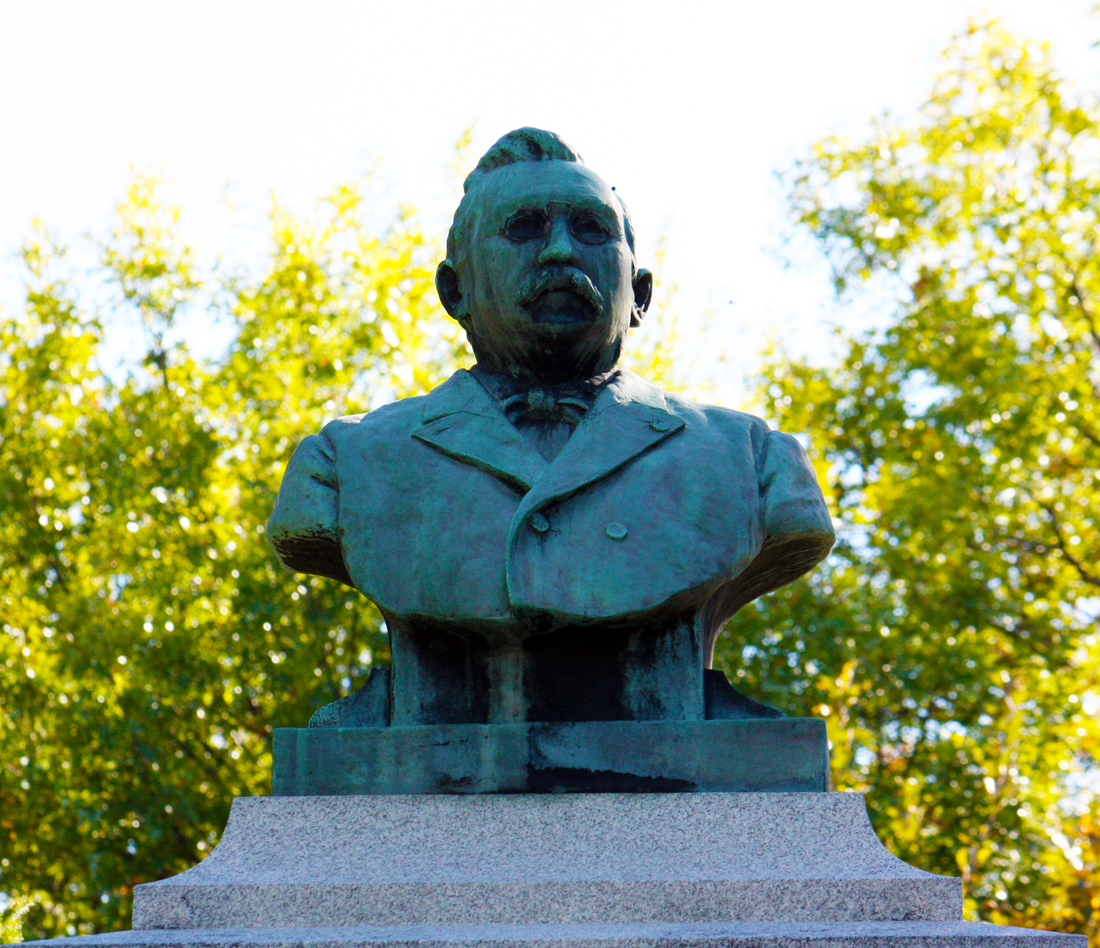 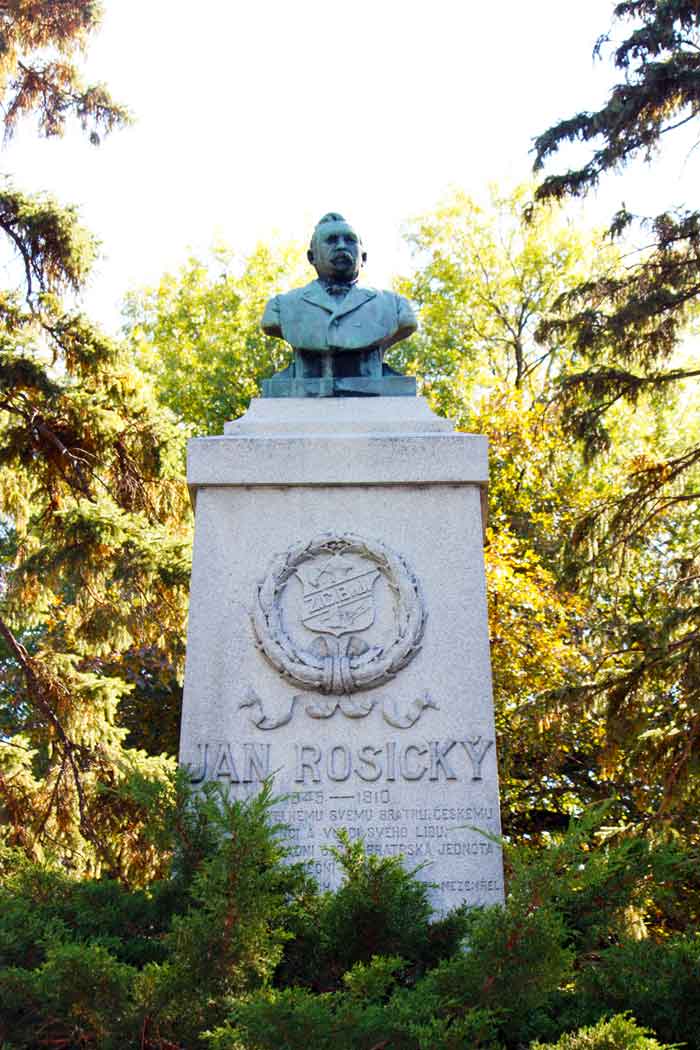 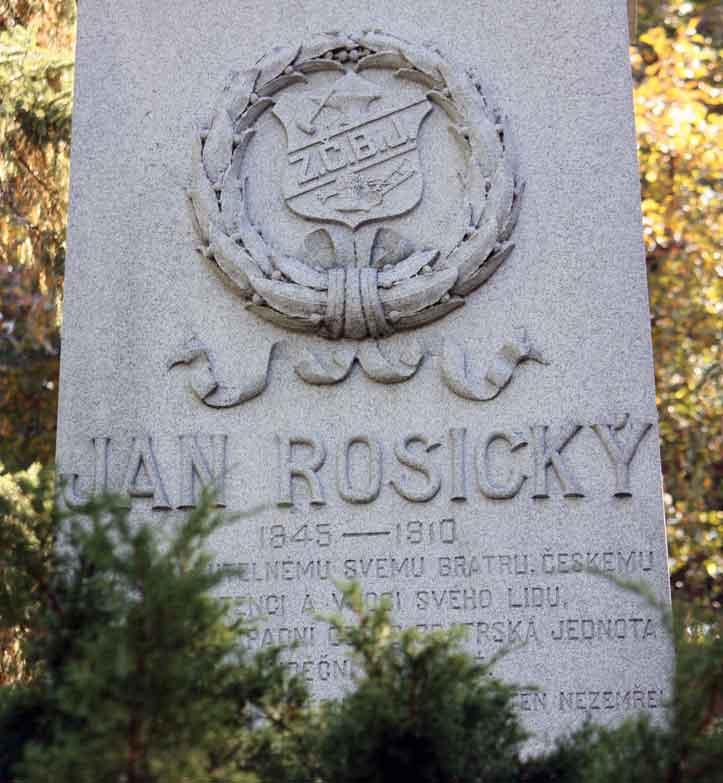 John G. Rosicky, president of the National Printing Company and president of the National Building Company, had as the basis of his business advancement thorough educational training, supplemented by laudable ambition and unfaltering determination, and thus it is that he has come to the head of the two important business enterprises in which he is now a controlling factor. Omaha claims him as a native son. He was born December 1, 1881, his parents being John and Mary (Bayer) Rosicky. The father was born in Humpoletz, Bohemia, and after his arrival in this city wedded Miss Bayer, a native of Klatovy, Bohemia. It was in 1867 that he crossed the Atlantic to the United States, arriving in Omaha in 1872. The following year he was put in charge of the Bohemian weekly paper known as the Pokrok Zapadn, which was established by the late Edward Rosewater. Mr. Rosicky purchased the paper in 1874 and conducted it continuously until 1900, when he sold out. He established the Hospodar in 1895 and it is today the paper of largest circulation among Bohemian publications in the new world. In 1901 he began to publish the weekly Kvety Americke, which three years later he consolidated with the Osveta, which was first published in 1884. The new publication became known as the Osveta Americka and in September. 1916, the name was changed to the Kvety Americke, under which it is still continued. Mr. Rosicky remained an active factor in the publication of these papers until his death, which occurred April 2, 1910. His widow survived until August 15, 1912, when she, too, passed away in Omaha.

In the schools of his native city John G. Rosicky pursued his early education and afterward spent two years as a student in the Case School of Applied Science in Cleveland, Ohio, where he pursued the electrical engineering course. Through the succeeding thirteen years or until 19 10 he was employed by the Nebraska Telephone Company and in January of that year he became president of the National Printing Company, which had been organized by his father in 1872 under the name of the Pokrok Zapadu Printing Company. This was incorporated in 1889 as the National Printing Company and Mr. Rosicky succeeded to the business on the death of his father in 1910, becoming president of the company. The Kvety Americke has a sworn subscription list of twenty-five thousand seven hundred and eleven and the Hospodar of thirty-one thousand and eight. The latter is America's only Bohemian farm paper and it has a wide circulation among the Bohemian speaking agricultural class throughout the entire country. Every department of the business is thoroughly organized and the wide circulation of these papers make them an excellent advertising medium. They are therefore accorded a liberal advertising patronage and, moreover, the papers have special representatives in various sections of the country obtaining subscriptions and advertisements. The business has been thoroughly developed along the most progressive lines and the work instituted by his father is now being ably conducted and broadened by John G. Rosicky in keeping with the spirit of modern progress. He is also the president of the National Building Company and in that connection controls important business interests.

On the 2d of April, 1905, in Omaha, Mr. Rosicky was united in marriage to Miss Emily B. Maystrick, by whom he has two children, Mary Bertha and John. Politically Mr. Rosicky is a republican. Fraternally he is connected with the Woodmen of the World, the Western Fraternal Bohemian Association and the Tel Jed Sokol Association. He is likewise identified with the Commercial Club and is a progressive, enterprising business man of the city, thoroughly alive to the opportunities in newspaper publication, and the wise utilization which he has made of his time and talents has brought him to a creditable place in journalistic circles.