George and Caroline Moore had their priorities in the right place. They didn’t put their date of birth or death on their tombstone (George died in 1914, Caroline in 1933), which they must have thought were useless bits of information. Instead they put pictures of the most important things in their lives there for eternity: Their beloved dogs. In truth, it's possible that Caroline was the real dog fanatic. She may have designed their marker after George died.

The Moore's owned Ak-Sar-Ben Kennels here in Omaha, and besides the Pekinese on their markers, they bred AKC Boston Terriers, English Toy Spaniels, and other breeds. They also showed the dogs in dog shows, taking home quite a few ribbons. Sun-Yat-Sen must have been Caroline's favorite. The dog won the champion of all classes in the 1924 Omaha dog show. The Omaha World Herald reported that she turned down an offer of $1,000 for the dog after the show. 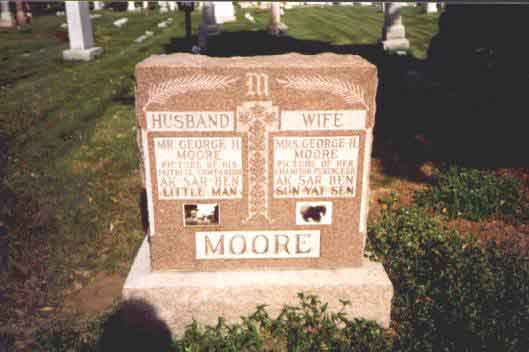 As you can see, the picture on the bottom has been vandalized, but the dog is still partially visible. This is really a very charming monument; the granite glows a warm, dark bronze in the sun and it has a personal and endearing quality to it. The pictures of champion “Ak-Sar-Ben Little Man” and “Ak-Sar-Ben Sun-Yat-Sen” are still very clear, despite the vandalism on "Little Man's."

Sun-Yat-Sen died in 1928 at age six, and was laid to rest in a white cement casket lined with silk. Mrs. Moore kept the casket and the deceased dog at her house, 2225 Lake Street here in Omaha, for almost a week, which borders on insanity in my opinion, or at least obsession. The Humane Society came to pick up the dog and bury it, finally. I love my own dogs, but keeping them around the house when they're deceased is not something I would even consider. The Moore's house is long gone, since so much of that area has been raized and rebuilt.

Caroline sent a Pekinese to President and Mrs. Roosevelt in 1933, and also sent along the instructions for keeping the dog healthy and happy. Caroline also boarded dogs at her house for a fee. Nan-Kee-Poo, owned by Miss Eyth of Pasedena, CA., had a room of it's own in Caroline's house, with a bed and other amenties. The cost for this was $12 a month, a good amount of money in 1928 to spend on boarding a dog.

"Omaha: The Gate City," a book written about Omaha's history by two people who have never lived here (which they say in the introduction, to prove that you don't have to live in a place to write a good book about it; their argument isn't proven by their book, which is dull, dry, and not all that informative and also not very good), lists a George H. Moore as a private in the Civil War, which could be this George H. Moore. I don't have his birthdate, but with a death date of 1914 it at least puts him in the ballpark for serving in the Civil War. I've also run across some information that a George Moore worked at the Peoples Store in 1907, and then at Union Outfitters here in Omaha in 1911, which could also be this George Moore.