To navigate the Walnut Hill pages, use the menu dropdown at the top of each page

James Bone was a long-time Council Bluffs resident, and when he was buried at Walnut Hill they made sure he would never, ever leave.  Read on to understand why I say that.

Bone was born in Ohio on November 28, 1834. He came to Mills County in Iowa in 1855 at the age of 21. He purchased 120 acres of farmland initially, but eventually owned 7,000 acres in both Iowa and Nebraska. James studied medicine with the thought of becoming a doctor, but the Civil War ended his studies. He joined the Thirty-first Ohio volunteer infantry and saw action at Stone River, Corinth, and Perryville. He mustered out of the Army in Atlanta in 1864 and came back to Iowa.

He must have bought a ranch in Fullerton, Nebraska at some point, which explains the 7,000 acres of land. The Daily Non-Pareil had at least a dozen news items over the years about the Bones going to their ranch for an extended stay.  They were a traveling family; many items showed up mentioning they were going to Kansas City, traveling east, and another said they had returned from California after spending the summer there.  There are many dozens of articles about him bringing cattle to market in Omaha, from his ranch in Fullerton. He must have been an extremely wealthy man to travel so extensively.

He married Anne Elizabeth Allison of Missouri in 1867 and they had ten children. You would imagine they'd need a big house for that many children, and supposedly their farm house was large enough. In 1870 they were still living in MIlls County on his farm...in the 1900 census they are in Kanesville, a town that merged with Council Bluffs at a later date. 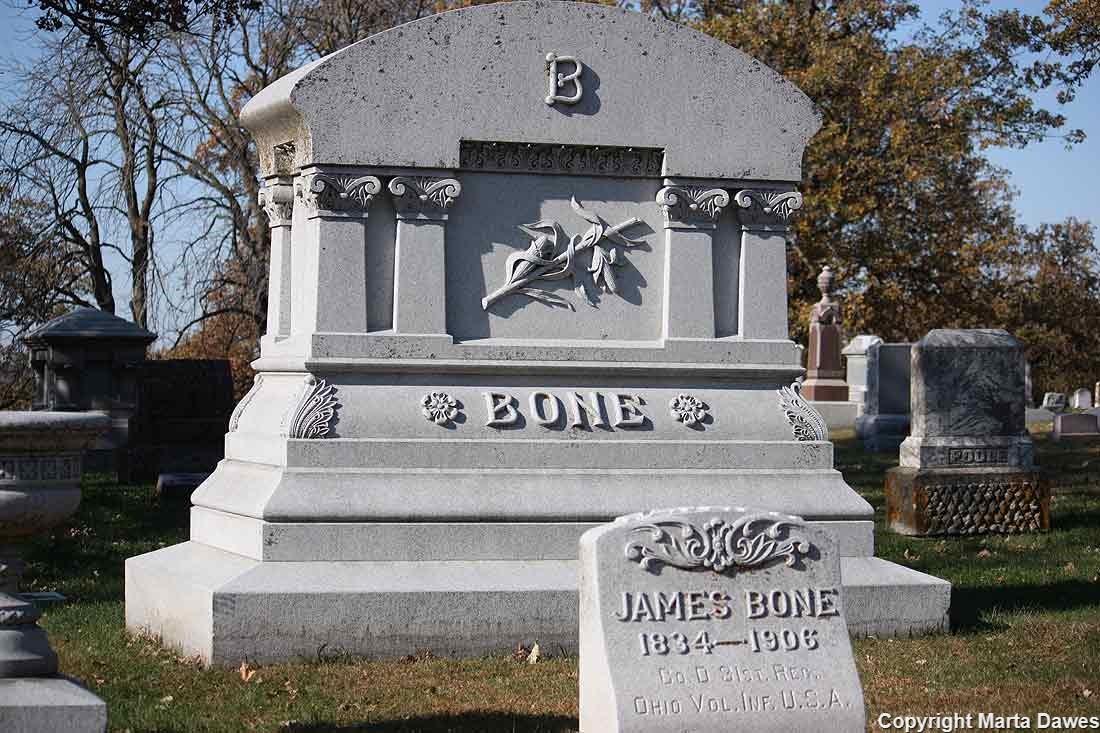 Bone died in 1906 of Bright's disease after a long illness. This is the same disease that supposedly killed Wolfgang Amadeus Mozart, unless you are one of those conspiracy-minded people who believe Mozart was poisoned. Bright's disease is today called acute nephritis, which is inflammation of the kidney and has several different causes.  Amazingly, Bone's 96-year-old father was still alive back in Ohio when Bone died.

According to the death notice in the Daily Non-Pareil, the Council Bluffs newspaper, dated November 11, 1906, the funeral was held at the Bone house, located at 549 West Washington Avenue in Council Bluffs, which today is right off Kanesville Boulevard. The spot of land the house occupied then is now a CVS pharmacy. We can guess that the house was a large expansive place, just by the houses that are left in that neighborhood.

Just in time for Halloween 2020, the account of his burial is a marvelously gruesome tale. Bones' coffin was an exact replica of President William McKinley's coffin. McKinley had been assassinated five years earlier in September 1901, and Bone must have made special note of the macabre design of McKinley's special casket. As a student of history, I knew the sad story of McKinley's death, who may have survived the assassination attempt if he'd had better doctors. I knew nothing about his casket.

McKinley's coffin was designed by the National Casket Company of Oneida, New York. The description in the New York Times article is more esthetic than Bone's death notice, which is where the gruesomeness comes in; I'll get to that in a minute. McKinley's coffin was made of "solid crotched Santo Domingo mahoghany...it is entirely hand-carved with mahoghany extension bar handles." It goes on to say that "the inside of the coffin had a metallic case lined with copper plate, with a full-length bevelled edge glass on top." It was "lined with cream-colored gros-grain heavy silk, shirred at the top and caught up at the top with imported silk thread."  It must have been a magnificent looking coffin, on the outside. It was that inside case that was weird.

Bone's death notice in the Council Bluffs paper stated that once Bone was placed in the coffin and the lid finally closed, he would be "inclosed (sic) in a steel vault which was hermetically sealed and locked for all time by means of steel springs, which clamped together when the lid was put in place."

Yikes! The Times article did mention that when McKinley was placed in the metallic case it would be hermetically sealed, but the reporter at the Daily Non-Pareil was more earthy in his description. Putting "steel springs" and "locked for all time" and "clamped together" in the same sentence certainly seems like James Bone wasn't ever getting out of that contraption. :-)

It's a curious experience to look into someone else's life, especially when nearly a century has gone by since that person died. While looking through census records on Bone and his family, both the 1900 and 1870 census have Anne's name, Bone's wife, as Angeline. The death notice said Anne, so which is the correct one? I found some Ancestry listings for Angeline Elizabeth Allison, which have the right dates and the right husband. Ancestry said she died in California, which I'm finding is a common occurrence for wealthy people of that time. They make their money here in Nebraska and Iowa, and then live part-time where the climate was warmer. She might have been living with her daughter, Sadie Hassad, who lived in LA. It could be that Angeline was her real name and the paper got it wrong. But, as you see below, Annie is on her headstone. Angeline is certainly classier than Annie.

There are more members of the Bone family in this plot. Daughter Sadie Bone Hassad died in 1958 at age 75, listing only a two siblings, James and Joicy, as still alive; she was sent back to Council Bluffs from California and buried in Walnut Hill, according to the death notice. 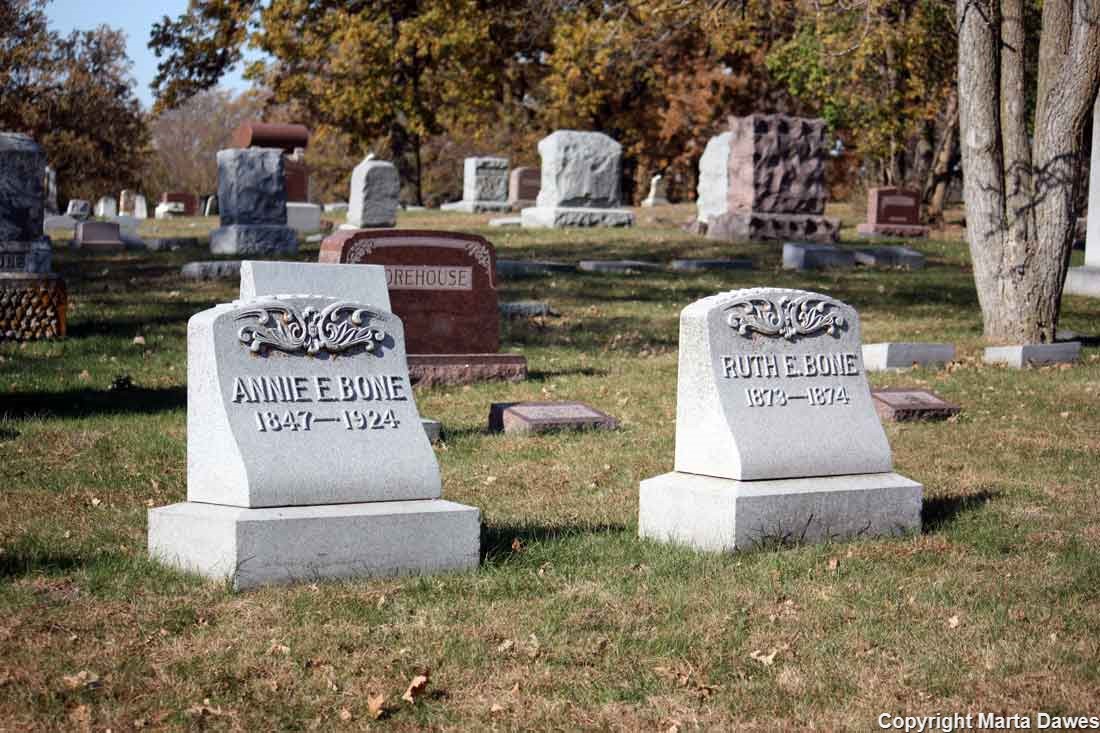 Annie Bone, wife of James, and an infant daughter, Ruth

A few years after James died, James' father, Valentine, also died. In 1909 there is a notice in the Evening Non-Pareil of one of the Bone family members, Joseph, suing all the other descendants of Valentine, to get a part share in some farmland Valentine Bone had owned in Pottawattamie County, Iowa. One of James' sons is named Joseph, but there is also a Joseph Bone as a defendant, so it's likely another relative of Valentine's side that brought the suit. All the defendants have 1/45 share in the farmland, but the notice seems to say they don't have that share and must appear to show how they are entitled to it. Nothing more is said about this suit, so we don't know its outcome. 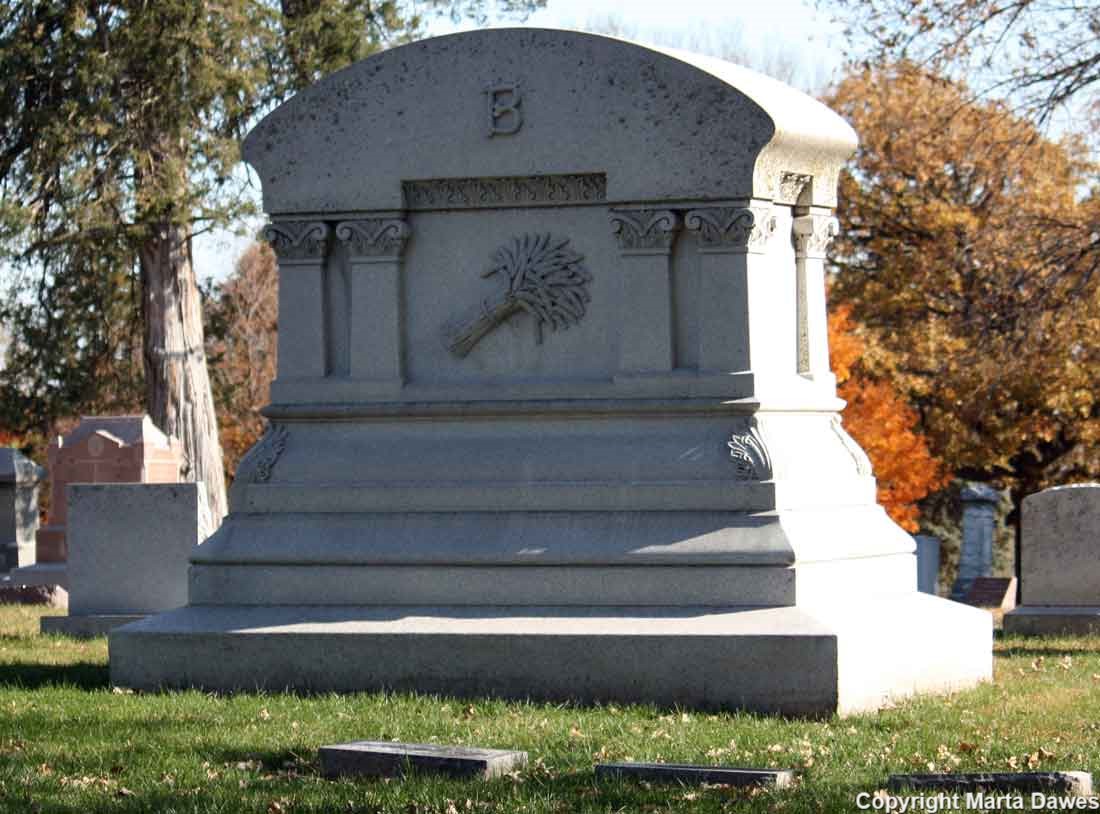 The other side of the Bone monument. Bone, being a farmer, put a sheaf of wheat and a stalk of corn on his monument so everyone would know what he did when they saw the stone.